The first court to sit in Yuba County and in Marysville was called the “Criminal Court of the First Instance, Sacramento District.” In order to understand what that meant, we need a brief history of what the court system was like prior to the Constitution of 1850.

The Mexican laws of 1837 established courts for the territory of California. The highest court had appellate jurisdiction and was similar to our Supreme Court today. It consisted of four judges and an attorney general and was divided into two benches. The three senior judges comprised the first bench and the junior judge the second bench. The first bench was called the “Court of the Third Instance” and its decision in all cases was final. Appeals to this court came from the second bench called the “Court of the Second Instance.” Below these courts was the “Court of the First Instance,” which was a local court somewhat similar to our present day Superior Court. The State was divided into districts and the County of Yuba was called the “Sacramento District.” The first magistrate of the Sacramento District was John Sutter. 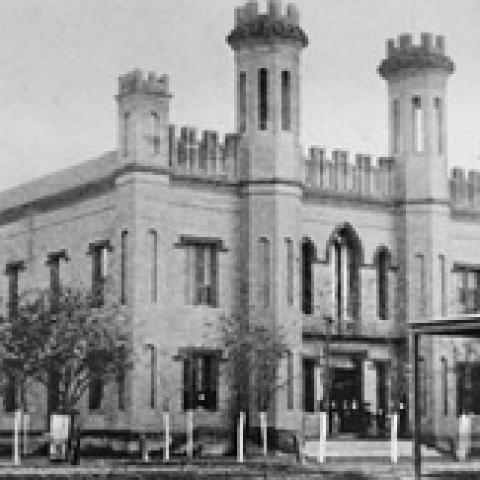 Between the American Conquest of California in 1846 and the ratification of the State Constitution in 1850, the existing court system had broken down. This was due to the fact that many new towns had come into being due to the gold rush, and these new towns had no court system. Marysville was in such a situation in January of 1850.

On June 3, 1849, the military governor of California, General Bennett Riley, issued a proclamation calling upon the people to elect “Alcaldes” and “Judges.” The Alcaldes were to be elected under the Mexican laws to administer justice until the courts established by the Constitution of 1850 were put into place. Therefore, on January 18, 1850, the people of Marysville elected Stephen J. Field the first Alcalde and J.B. Wadliegh the second Alcalde. These were the first elected judges in Yuba County.

It appears that the second Alcalde had little to do and he served mostly like a vice-president. Thus, he fades from history. While Steven Field was the first elected judge in Yuba County, he was not the first to hold court in the County. The first session of the Alcalde Court was not held until February 7, 1850.

The first actual court proceeding took place on January 26, 1850. It is believed that the session was held in the old adobe building which was located on the banks of the Yuba River and was the headquarters of the proprietors of the area of Marysville. The judge who presided over the proceedings was one R. A. Wilson, who was the judge of the Criminal Court of the First Instance, Sacramento District.

On January 24, 1850, Mr. George Armstrong and several others were indicted by the first Grand Jury in Yuba County. Mr. Armstrong’s matter was continued to January 25 and then was continued to January 26, 1850. While the Court was hearing Mr. Armstrong’s matter, a Mr. Eli B. Lundy became involved in the proceedings and thus, became the first person convicted and sentenced in Yuba County. Mr. Lundy was already a person who was under indictment for committing an assault and battery with the intent to kill.

The best way to describe the events of January 26, 1850 would be in Judge Wilson’s own words. He wrote this as the minutes of the Court as he had no court clerk:

“The above-named Eli B. Lundy a person under indictment in the Court for committing an assault and battery with the intent to kill, entered the building at Marysville in which this courtroom was in session, and over the door of which building was painted in large letters “Court House” while the Court was in session and engaged in the proceeding case of Armstrong and came up with his hat on to the place where the prisoner Armstrong was sitting at the side of the Judge and at or about the same time a number of other persons armed with guns and other deadly weapons entered the said building. The said Lundy then and there took hold of the prisoner and said to him among other things come with me and attempted to lead the prisoner out of the presence of the Court; and the said Lundy continued to use disgustingly profane and abusive language to the person of the Judge until the said Lundy was put out of the room by the acting Sheriff.

It is therefore considered and ordered by the Court now in session that the said Lundy receive on his bare back 15 lashes well laid upon and that he pay in addition a fine of $400.00 and in default of immediate payment that he receive an additional 20 lashes and that Robert B. Buchanan the acting Sheriff see this order carried into effect and that an acting clerk of this Court furnish him a copy of this order which shall be his authority.”

History does not tell us whether or not Mr. Lundy got the second 20 lashes or paid his fine. As to Mr. George Armstrong, he was appointed counsel, a Mr. Rae. Mr. Rae holds the privilege of being the first appointed counsel in Yuba County. On the motion of Mr. Rae to quash the indictment, the Judge granted it and Mr. Armstrong was discharged. The case against Mr. Armstrong was stealing cattle. The probable reason that the case was dismissed against Mr. Armstrong was that they were unable to prove that the cattle stolen or killed were branded cattle since most of the cattle were unbranded at that time.

This first Grand Jury also returned an indictment against several other individuals for cattle stealing. There is no mention as to what happened to their cases. In any case, the first Grand Jury in Yuba County’s history was discharged also on the January 26, 1850, having done their duty.